Mark Barhanovich, 54, of Biloxi Mississippi was on fishing trip with a friend early Sunday morning September 16, 2012. They were in a 23 foot center console fishing boat off the coast of Mississippi in the Mississippi Sound, just east of Deer Island on their way to Horn Island. Biloxi, Mississippi is the largest city in the area.

The outboard motor struck a submerged object (many think it was a dredge pipe) about 6:30 am Sunday. The outboard motor broke loose from the transom, flipped into the boat, and its propeller struck Mark Barhanovich in the back. Another friend was nearby in another boat at the time of the accident.

The emergency call came into Mississippi Department of Marine Resources (MDMR) at 6:39 am Sunday morning.

Mark’s friend in the nearby boat ferried law enforcement and ambulance crews from shore to the disabled vessel.

Mark was taken to Jackson County Small Craft Harbor, then to to Ocean Springs Hospital where he was declared dead at 7:52 am Sunday morning as friends and family were gathering at the hospital.

Mark Barhanovich is described as a pillar in the community, as being from a great family, a generous man that never met a stranger, and as a community supporter. He left a wife, two daughters, a son, and two grandchildren. The high school stadium in Biloxi is named for his father.

Attendance at his visitation at Our Lady of Fatima Catholic Church on Wednesday night was estimated at 2,000 to 3,000 people.

About 1,000 people attended his funeral at the same Church on Thursday.

Mark had many accomplishments in his life including twice bowling 300, being selected as Father of the Year by the local Lions Club, playing football and baseball for Biloxi High School, being a place kicker for the University of Southern Mississippi, being an avid golfer, working with city youth leagues, working with several civic organizations, and supporting the high school, but he is most remembered for his many good deeds.

He was employed as a vice president at BancorpSouth Insurance and had worked there since 1985.

Area papers widely carried news of his passing, including an order from the Mayor of Biloxi to fly flags at half mast through Thursday in memory of Mark Barhanovich and another widely known gentleman that passed away over the weekend.

Our coverage above is a compilation of media reports from Gulf Live, Sun Herald, Hattisburg American, The Mississippi Link, and LinkedIn.

We have not seen a similar outpouring of love from a community after an adult boat propeller fatality since Dr. Stephen Keller of San Jose, California was struck on Lake Tahoe in August 2011. Dr. Keller was a dentist that similarly was beloved by all.

We extend our condolences to Mr. Barhanovich’s family and friends in their time of grief.

Details of the Accident

A National Oceanic and Atmospheric Administration (NOAA) map of the area from page 4 of their Booklet Chart for Cape St. George to Mississippi Passes NOAA Chart 11360 is partially reproduced below. It shows the relationships between Ocean Springs, Biloxi, Deer Island, and Horn Island. 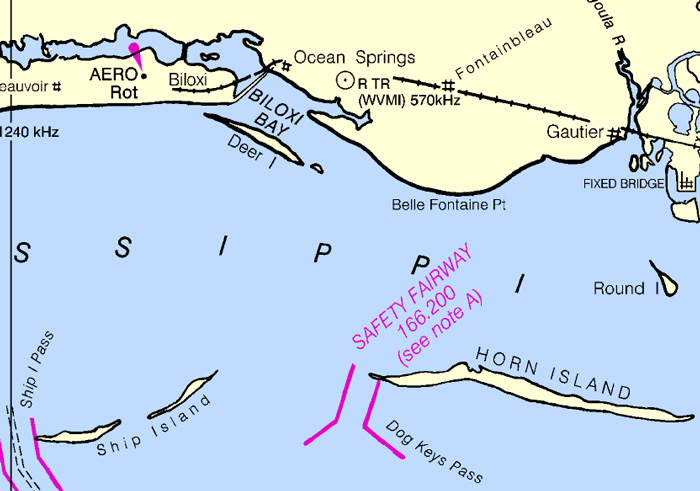 Mark Barhanovich, of Biloxi, was off the east end of Deer Island headed toward Horn Island at the time of the accident. After his injuries, he was taken to a hospital in Ocean Springs.

Mississippi Department of Marine Resources (MDMR) reported the boat struck an unidentified object that caused the outboard to break free and flip into the boat.

We notice several online forums and some references in newspaper comments to other boats striking a dredge pipe in the area of the accident.

The Mississippi Port Authority is currently dredging the Port of Gulfport. Dredge spoils are being shipped 25 miles to a barge about 4,000 feet off the east tip of Deer Island. From there, the spoils are pumped as a slurry in a dredge pipe to the island as part of a project to add about 40 acres to the east tip of Deer Island. The additional 40 acres will bring the island close to its footprint back in 1850. The project is to be completed in 2013. Crews are working 24 hours a day, 7 days a week. At this point in time we are not sure the boat carrying Mr. Barhanovich even struck a dredge pipe, let alone this one. We are only providing this as reference information.

We found the 2012 Week 37 USCG Local Notice to Mariners from District 8, dated September 12, 2012. An entry for Biloxi Bay references the ongoing dredging activities. The notice is copied below along with the header. 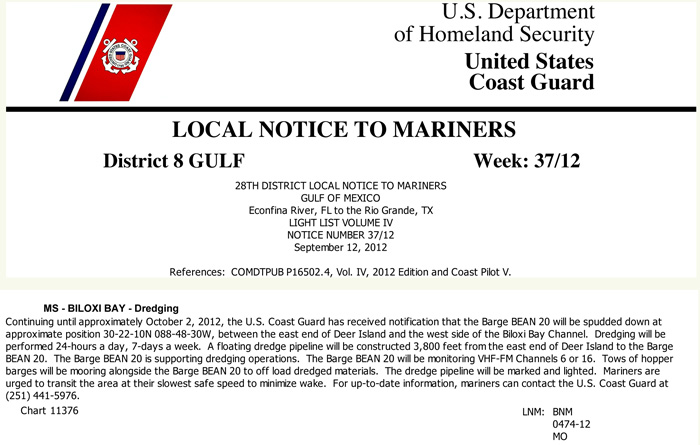 USCG Notice to Mariners of Dredging at Deer Island Mississippi

USCG’s notice identifies the barge associated with the operation off Deer Island as Barge BEAN 20.

We used GPS Visualizer to plot the location of Barge BEAN 20 as supplied by USCG in the 2012 Week 37 mariner notices.

The barge’s location is marked by the red balloon in the map above. It is east and a little north of the east end of Deer Island.

Some boating forums are discussing the accident:

23 September 2012 Update – 22 September 2012 SunHerald “Coast Guard Investigating if Dredge Pipe Played Role in Accident” reports pilings (look like pylons) now mark the general area of the dredge pipe. A U.S. Coast Guard Commander in Mobile said the dredge pipe is being investigated as a possible contributor to the accident. They note the pipe floats up or sinks based on its contents. Accounts of several people hitting the pipe are mentioned. The Coast Guard asked for more buoys and markers after the accident which were quickly installed per the dredging spokesman. One person that struck the pipe says the “Guys working the dredge said I was the sixth boat in two hours to hit it.” He also noted, Sea Tow was sitting in the channel in plain sight (just waiting to haul the next victim off). The SunHerald quotes some USCG propeller accident statistics, cites our “List of Boat Struck Dredge Pipe Accidents”, and cites the death of a young boy in Sioux City Iowa.

25 September 2012 Update – Recent Satellite Image – if it turns out that the boat hit the dredge pipe we would anticipate a discussion of how well the pipe was marked prior to the accident. Today we found a Sunday 12 August 2012 satellite image of the area. A low resolution version is shown below. It appears to show the barge and one or more vessels beside the barge. We are working on a higher resolution (.5 meter resolution) version that may be able to identify the frequency of markings on the pipe on that date. A larger image of the area shows considerable boat traffic on that Sunday. 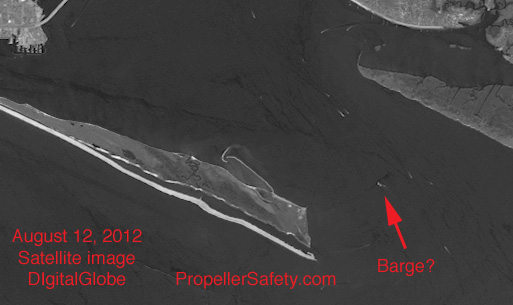 27 September 2012 – Satellite Image fundraiser – we talked to a reseller of the image above. The image above is available in .5 meter resolution black and white (same color values as shown above) for $500. It gets a bit cheaper after the image is over 90 days old. If anybody is interested in sponsoring the image, please contact us at the Contact US tab in the top menu. We would be happy to run an ad by the image for your business or some cause you were interested in in return as long as they are family appropriate. There is no guarantee that the markers will be visible in the .5m resolution image. We suspect they, their shadows, or their wakes will be. You can confirm there are no clouds in the area of interest in the image above. The .5 meter resolution image will be black and white like the image above and things will be in the same place, the image will just be many, many times larger allowing us to see much smaller objects.

I also found a late July 2012 satellite color image that shows the barge in the same location which confirms the object we have labeled as “Barge?” in the image above is in fact the barge.

2 October 2012 Update – The 30 September 2012 Sun Herald reports the City of Biloxi will act on a resolution naming Circle Park, where Mark Barhanovich played as a child, after him at their meeting on Tuesday October 2nd.

6 October 2012 Update – the renaming of the park referred to above did happen on October 2nd. Circle Park is now named Mark Barhanovich Memorial Park. We also see the High School released red and white balloons in his honor at a home football game last night (Oct 5th).

Request for Information in the Deer Island Accident

In May 2010, a young boy in Sioux City Iowa was killed when an outboard motor struck a dredge pipe, the motor broke off, flipped into the boat, and he was struck by the propeller. When the boating industry started saying this was a very rare accident, we developed a list of accidents in which outboard motors flipping into boats and another list of boats striking dredge pipes to raise awareness to these types of accidents.

It sounds like Mark Barhanovich may have been in a similar accident.

We contacted MDMR in an attempt to learn the make of the boat, the make of the outboard, and the size of the outboard to add it to our list of similar accidents. MDMR told us they had no details on the accident and no information on the boat or outboard. They said the U.S. Coast Guard Mobile Section had taken full command of the investigation. We called USCG Mobile and were told no details will be released until the investigation is complete which may be quite a while.

If anyone is aware of the make of the boat, the manufacturer of the outboard, or the size of the outboard we would appreciate a note via the comments below or you can send us a private message via email at the Contact Us tab in the menu at the top of this page.