Mark Barhanovich (deceased)is the defendant in a Jones Act suit by C.F. Bean regarding the September 16, 2012 boating accident in which Mr. Barhanovich is alleged to have struck a dredge pipe near Deer Island, Mississippi.

The current lawsuit is:
In the Matter of C.F. Bean LLC, as Owner Pro Hac Vice and Operator, and Bean Meridian LLC, as the Record Owner, of the Barge Bean 20, Official 627225, Praying for Exoneration from or Limita v. Mark Barhanovich. Filed 15 March 2013 in Federal Court in Mississippi Southern District Court.

The motive behind C.F. Bean and Bean Meridian in filing the case is an attempt to limit any potential liability on their part. They are doing this by claiming the Jones Act applies. In the U.S. (with the exception of some states and some situations), the liability for damages and injuries caused by a vessel in navigable waters is limited to the value of the vessel and its contents (freight) after the incident. Back in 1851 when Congress passed the Limitation of Liability Act (now part of the Jones Act), their intent was to reduce the potential liability of ship owners. Congress reduced their potential liability to encourage investment and competition in waterborne commerce (shipping and transportation).

Additional Details of the Complaint

The specific barge in question is the Bean 20. It is registered in the United States and said to be fit for service.

The complaint says Mark Barhanovich’s “recreational vessel is believed to have allided with an unknown stationary object.”

The complaint notes their belief that his wife, other family members, his survivors, or others who sustained losses as a result of the accident “contend that a discharge line from the Bean 20 caused or contributed to the said accident, which is expressly denied by C.F. Bean L.L.C. and Bean Meridian L.L.C.”

It goes on to state the accident was not the result of any fault on the part of C.F. Bean, Bean Meridian, the Bean 20, or any equipment or apputenances of the Bean 20.

The complaint says that any resulting injuries, damages, and losses from the “alleged incident” “were caused solely by the fault and/or neglect of persons and/or vessels for whose actions Complaintants are not responsible and/or by conditions for which the Complaintants cannot be held liable and or over which it had no knowledge or control” (That is polite speak for saying it was Mark Barhanovich’s fault.)

They go on to say they are not responsibly for any losses, damages, or injuries related to this accident, BUT if the Court should find them liable, they claim the Limitation of Liability Act (also known as the Jones Act) applies to this situation.

C.F. Bean and Bean Meridian note that claims against them may exceed the approximately $2.4 million value of the vessel plus its contents so they are filing this suit to limit their liability.

They note the value of the vessel plus its contents will be adjusted with an interest rate of 6% from the date of stipulation of its value.

They offer an affidavit from Norman Dufour, Jr., a marine surveyor from Louisiana stating that in his opinion, the Bean 20 is worth approximately $1,620,00. Similarly, the complaintants, in conjunction with International Fidelity Insurance Company stipulate the value of Bean 20 plus its freight (predominantly the dredging equipment?) as $2,388,504.

C.F. Bean and Bean Meridian ask the court to:

C.F. Bean and Bean Meridian have since requested three attorneys be allowed to prosecute their case:

Approval has been granted for the first two. Approval for the third attorney was requested later and is still in progress as of March 20, 2013.

Mr. Salloum and Shellye V. McDonald of Franke & Salloum filed the complaint in behalf of C.F. Bean and Bean Meridian.

On 20 March 2013, Judge Halil Suleyman Ozerden approved the security (Bean’s estimate of the value of the vessel plus its contents) AND restricted all future claims to come through this court proceeding.

On March 20, 2013 Judge Ozerden also ordered a notice be issued that all parties with a claim against Bean in this case must file in this court by 6 May, 2013 and that Bean will be claiming the right to exoneration or limitation of liability (Jones Act). It will be mailed to previously identified parties and published in the Biloxi Herald. The actual notice was issued on March 21st.

We often see the Jones Act offered as a defense in propeller injury cases (Mr. Barhanovich was killed by the propeller when the outboard flipped into the boat after striking a submerged object, like the dredge pipe).

We first encountered the Jones Act when we covered the Bright Field accident at the New Orleans Riverwalk back in December 1996.

Our state (Oklahoma) became well aware of it when a barge struck a bridge on I-40, opening up a span of the bridge into which several cars plunged into the Arkansas River.

The Jones Act is frequently proposed as a defense in recreational boat propeller accidents by marine drive and boat manufacturers when the accident occurred in large lakes, large rivers, bays, or oceans. In those instances, the value of the vessel and contents is typically less than $50,000. The attorneys battle it out in court, each side trying to claim tug the white flag marking the potential liability closer to their side.

Some states allow Maritime Law / Admiralty and the Jones Act to apply, but strike out the portions limiting liability to that of the vessel and its contents. For example, William E. Coxe III v. Yamaha Motor Company and Maverick Boat Company was such a case in the U.S. District Court of South Carolina Beaufort Division in Admiralty.

We are not certain as to the situation in Mississippi (does the State of Mississippi strike out the limitations or not.) However, we do note that per our understanding, those limitations do not apply to situations in which the vessel was not seaworthy OR in which the owner’s negligence contributed to the loss.

We suspect that if the limitations do apply, attorneys representing Barhanovich claimants will say the owners (C.F. Bean and Bean Meridian) were negligent (or at least partially negligent) for not properly marking the dredge pipe, for not following up on previous strikes, etc.

We also anticipate attorneys representing Barhanovich claimants will say the Jones Act (Limitation of Liability Act) does not apply because the waters were not navigable by commercial vessels. Mark Barhanovich is thought to have struck the dredge pipe between Bean 20 barge and Deer Island. Bean 20 was positioned about 4,000 feet off Deer Island to allow towed hopper barges to bring dirt to it from the dredging operation about 25 miles away at the Port of Gulfport Mississippi. The dirt from the hopper barges was then conveyed to shore thru a dredge pipe in an effort to rebuilt the island. We suspect Bean 20 was positioned offshore to allow the loaded barges to not be striking bottom in the shallow waters closer to the island (signaling those are non navigable waters).

We found a National Oceanic and Atmospheric Administration (NOAA) map of the region and overlaid the location of Bean 20 per USCG’s week 37/12 Notice to Mariners. 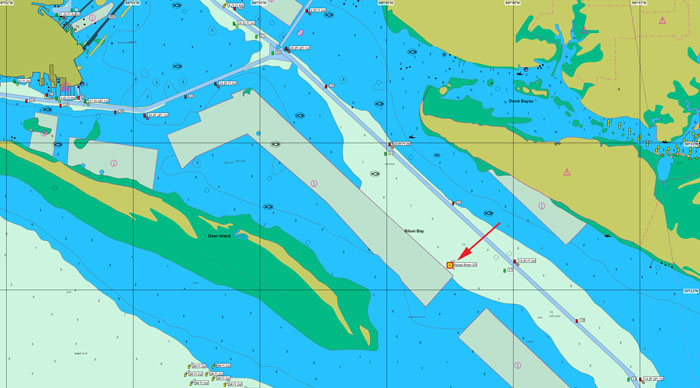 If you click on the map above, you will see a large map of the area. The red arrow points to the marker for Bean 20’s location.

The map identifies several reasons why the waters between Bean 20 and Deer Island are not navigable waters.

It could certainly be argued that areas between Bean 20 and the Deer Island where the accident is thought to have taken place were non navigable waters and thus not subject to the Jones Act.

We anticipate Barhanovich claimants may also include the recreational boat manufacturer and the marine drive manufacturer in the list of defendants in this or a similar trial claiming the drive should not have flown up into the boat causing Mark Barhanovich’s fatal injuries. Or, C.F. Bean, Bean Meridian, or their insurance companies may drag the boat and drive manufacturers into court with them in an attempt to offload some of their potential liability to other potentially liable parties. The State of Mississippi, the Coast Guard and others involved with the dredging operation might also be candidates.

Another factor is Mark Barhanovich himself. He was no ordinary man. He and his family had a great history in Biloxi and were loved by the community. His supporters may mount a substantial campaign in defense of his family that might could be a factor in the case.