Manufacturers either test them on the water by actually running over a log of a given type, diameter, and length, or on a test stand they think simulates on water testing.

These impact tests are typically conducted at a speed based on the horsepower of the outboard. Testing tends to start at a lower speed, then build up to the maximum speed selected for the test. Some manufacturers conduct more that one test at the maximum speed tested.

In general, the outboard must still be operational (run) after the test, the cowl is to remain attached, and the outboard is to be capable of at least limping back to shore (capable of some steering and of some trim). The outboard is to have no major oil leaks. At least one manufacturer say no parts of the outboard are to enter the vessel during the testing.

Focusing our discussion on larger outboards, especially those targeting tournament bass boat applications, most manufacturers impact test them at maximum speeds of the nature of 30 to 40 mph.

The problem is tournament bass boats tend to run 70 mph or faster.

The striking of very heavy or fixed submerged objects (dredge pipes, large logs, floating trees, piers, pilings, stumps) can result in at least some outboard motors breaking off at speeds below the maximum speed the outboard is log strike tested at. For example a specific outboard may be log strike tested at 35 mph, but can break off at 30 mph when striking a stump. If they will not break of at slower speeds, they most certainly can break off at speeds in excess of the log strike test speed when striking heavy or fixed submerged objects.

Some outboards that break off will enter the boat, typically with the engine still running and the propeller turning at a very high RPM.

Optimally the vessel would be fail-safe tested at its maximum speed. Some may argue it is not practical to design outboards to survive impacts at those speeds without sometimes breaking off and flipping into the boat.

Basic approaches to designing fail-safe large outboard motors in terms of the log strike system include (1) increasing capacity of the log strike system so it can handle faster and/or harder strikes without breaking off (includes the transom and jack plates), (2) designing the skeg and/or lower leg to break away during severe impacts, (3) using a tether to restrain the outboard and prevent it from entering the passenger area of the boat if it does break off, (4) limiting maximum speed of the vessel.

For more information on the design approach used, please see on our post titled, Design Chart for Preventing Outboard Motors From Entering Boats.

The chart shows how those operating fail-safe outboard motors would not be exposed to risk at each step of the chart like they currently are. Currently bass tournament anglers are hoping they don’t hit something, hoping they did not hit it fast enough the outboard will break off, and hoping that if it does break off, it wont enter the boat. That is if they are among those that are actually aware of the hazard at all. 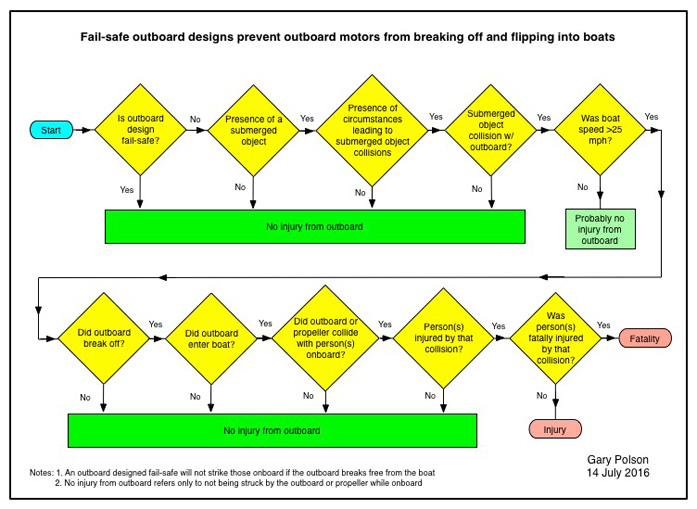