Pontoon boat propeller accidents tend to pileup in the summer months. But the recent cluster of 6 media reported pontoon boat propeller accidents in 8 days should be a wake up call for change. As always, these are media reports, exact circumstances may not be correct and things may change by issue of actual official boat accident reports, however pontoon boats were involved and people were thought to be struck by the boat or propeller: 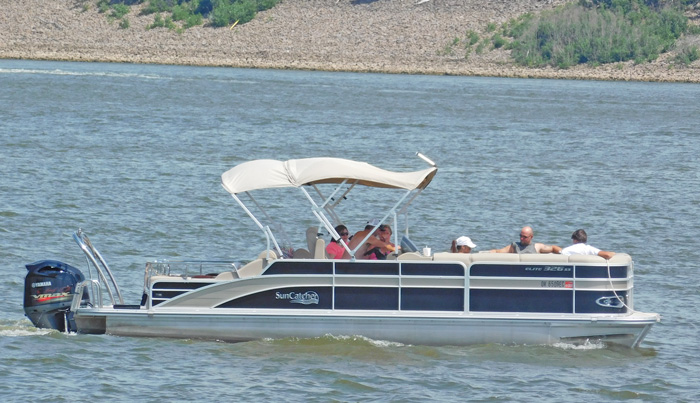 We hope this cluster of 6 accidents, the 150 plus pontoon boat propeller accidents listed on our Over the Bow Pontoon Boat Propeller Accidents List, plus other recent pontoon boat accidents, like that of three year old Aiden McKitrick on Lake Ray Hubbard in Texas will catch the attention of the pontoon boat industry and encourage them to make safer pontoon boats. We also hope it raises public awareness and encourages the public to do what they can to improve their safety on the water as well.

This is not rocket science, there are several off the shelf approaches ready for implementation. Plus there are several things the industry, individuals, the press, regulators, law enforcement, social media, and others can do to improve pontoon boat propeller safety as well.

Common threads in pontoon boat accidents are bow riding, falling over the front rail, falling through the front gate, deficiencies in rental boat education, and excessive use of alcohol (Operation Drywater).

While the industry has long objected to the use of propeller guards, some modern guards lend themselves well to certain pontoon boat applications. Most pontoon boat propeller accidents involve running over someone who fell over the bow or jumped off the bow. That means guards open to the rear will still protect against most accidents. Guards open to the rear reduce drag, and reduce the possibility of fouling with weeds. It depends on the maximum speed of the particular pontoon boat and several other variables, but propeller guards can be a good fit for many pontoon boats.

We especially urge facilities renting pontoon boats to consider the use of propeller guards and to use educational materials similar to those on RentalBoatSafety.com and to pay special attention to the points surrounding propeller safety issues.

In addition to prop guards, rental boat safety education, and Operation Drywater, there are several other approaches to the issue.

We direct anybody interested in actually addressing this issue to three of our previous reports: