Named for Kali Gorzell, the law will require mandatory use of kill switch lanyards on certain vessels. 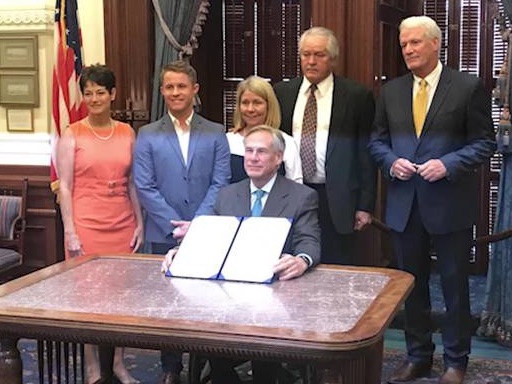 Special thanks to KSAT San Antonio for their coverage of the signing of the bill and the image above.

The basics of the law require the use of a kill switch lanyard or wireless kill switch by the boat operator on motor boats less than 26 feet in length when underway if it is equipped with one by the manufacturer. The boat operator is also required to first verify the switch is operational and fully functional. If using a wireless system, the bill requires a wireless man overboard transmitter be attached to every person on board.

Actual text of the bill as signed is below:

BE IT ENACTED BY THE LEGISLATURE OF THE STATE OF TEXAS:
SECTION 1. Subchapter D, Chapter 31, Parks and Wildlife Code, is amended by adding Section 31.1071 to read as follows:
Sec. 31.1071. OPERATION OF MOTORBOAT WITH EMERGENCY ENGINE CUTOFF SWITCH. (a) In this section, “engine cutoff switch” means an emergency switch installed on a motorboat that:
(1) is designed to shut off the engine if:
(A) the motorboat operator using a lanyard attachment activates the switch by falling overboard or otherwise moving beyond the length of the lanyard; or
(B) the motorboat operator or a passenger using a wireless attachment activates the switch by falling overboard and submerging a man-overboard transmitter; and
(2) attaches:
(A) physically to the motorboat operator through the use of a lanyard worn by the operator; or
(B) wirelessly through the use of a water-activated man-overboard transmitter worn by the motorboat operator or any similarly equipped passenger on the motorboat.
(b) A motorboat operator may not operate a motorboat less than 26 feet in length and equipped by the manufacturer with an engine cutoff switch while the motorboat is under way and moving at greater than headway speed without first verifying that the switch is operational and fully functional and properly attaching the lanyard or wireless attachment, as appropriate for the specific motorboat, to the operator’s body or to the clothing or personal flotation device being worn by the operator.
SECTION 2. Section 31.127, Parks and Wildlife Code, is amended by adding Subsection (g) to read as follows:
(g) A person who operates a motorboat in violation of Section 31.1071 commits an offense punishable by a fine of not more than $200.
SECTION 3. This Act takes effect September 1, 2019.

We Covered the Kali Gorzell accident and related events as they happened: