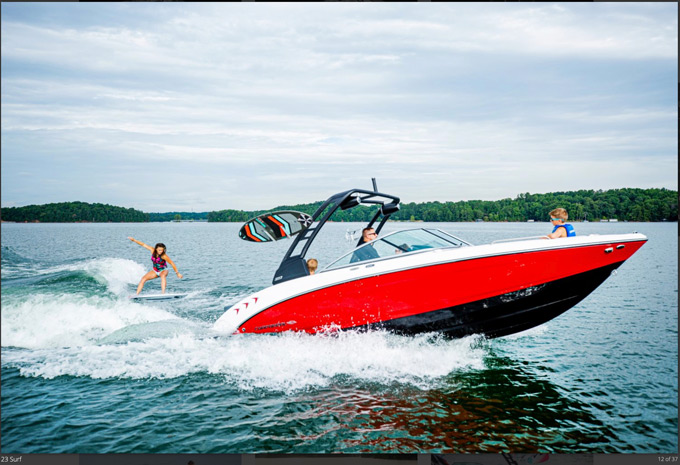 As seen in the two images above, there is a young boy alone in the bow.

Modern wakesurf boats often run with the bow way up in the air as they attempt to create a giant hole in the water for wake surfers to ride.

Reasons for keeping people out of the bow or limiting people in the bow include:

We find Chaparral’s specific image above to be pressing the limits of what a boat manufacturer would want users of their boats to be doing, especially novice operators. Several children have been ejected from open bow ski boats. Open bow wakesurfing boats appear to provide a far riskier environment in terms of bouncing them out.

We looked up what Chaparral says in their own operators manuals. Below is page 52 from Chaparral’s 2020 Surf Series boat operator manual. 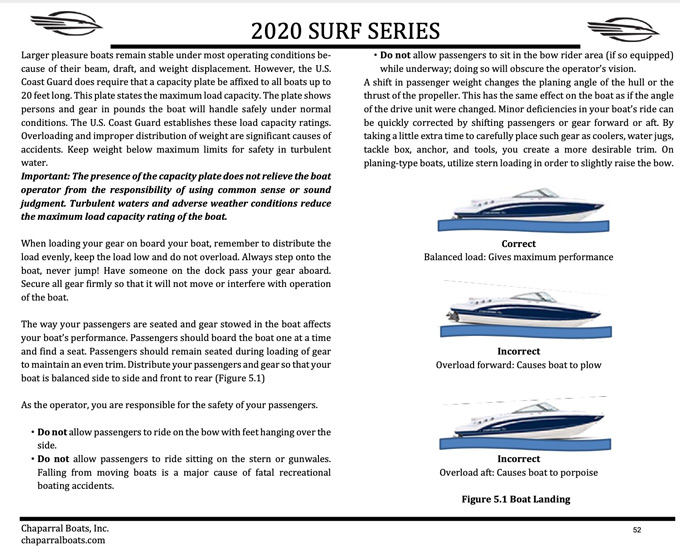 A marked up closeup of page 52 is provided below.

According to Chaparral’s 2020 Surf Series manual above, they say nobody is to be riding in the open bow when underway. We suspect they recognized some of the challenges listed earlier on this page.

We note the operators manual above is for 2020 Surf Series models. Chaparral may have changed their open bow seating requirements for 2021, or specifically for the Bravo Four S forward facing drive, or specifically for this model. They may now allow people to ride in the bow. If they do, it still seems odd to let children ride up there without an adult. The particular boy shown in the photo above might be older than some age limit restriction.

The image below is provided by Mercury Marine as part of their press materials for their new MerCruiser Four S forward facing drive that looks like it was taken at the same time as the Chaparral boat image above. We are going to look at a series of 5 images, 4 of which are cropped from the full Mercury press release image below. 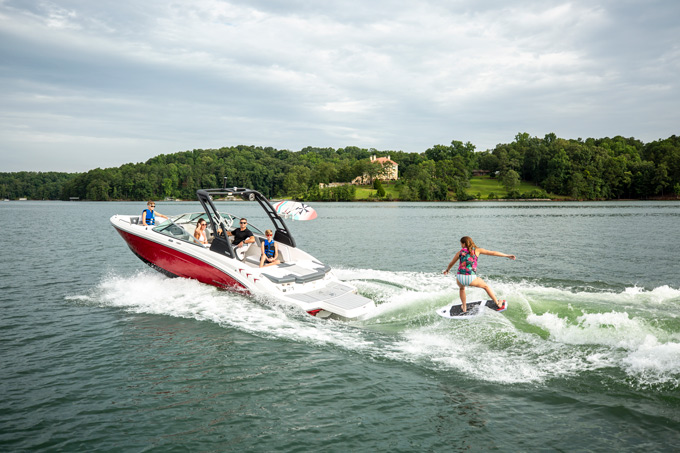 At first look, it is obvious the young boy is way up in the air as the stern is plowing through the water to create a wake for the wake surfer. We do not see an adult with him, however it is possible an adult was lying down in the bow. However, other images in the same series do not indicate another adult on board. Again it seems like an image a marine manufacturer would not be providing with their media press kit materials.

We looked at the image again and were even more startled to find absolutely no one looking forward to see where the boat is going. We suggest Mercury Marine immediately removes this image from their portfolio.

Closeups of the Brunswick / Mercury Marine / MerCruiser image above

A series of images cropped from the Brunswick image above follows.

Many water ski safety and tubing safety discussions note it takes a minimum three people for those activities. One to operate the boat, a spotter watching the person being towed or riding the surf, and the person being towed or wakesurfing. In this image everybody is acting like a spotter. Everybody on board has their eyes on the wake surfer. While it makes for a nice action shot, it is incompatible with safety operating a boat. 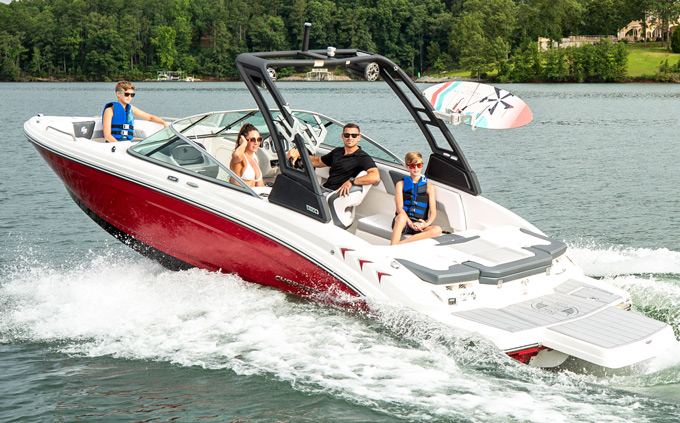 As we begin to zoom into the image, it is not obvious that the lady or the boat operator is wearing a life jacket. They may be wearing fanny packs or some other inflatable, but they are not wearing conventional wake boarding / wakesurfing life jackets / PFDs.

A closer look continues to show everyone is looking back and no one is looking where they are going. That is a recipe for disaster. We still cannot see life jackets on the lady or the boat operator. We know many boat builders still show images without life jackets and it is not a legal requirement in most jurisdictions, but it shows the boat builder’s concern for safety if everybody is visibly wearing some sort of life jacket or PFD in their promotional images.

It is possible the boat operator only turned around quickly for the photo op, but his body is rotated in the seat, his left arm over the back of the seat, and his right hand on the far left side of the steering wheel like he plans on being like this a while. They may be shooting these photos on Lake X or someplace temporarily closed to other vessels.

In addition to nobody looking where they are going, they have the boy in the very front of the bow and nobody is watching him either. 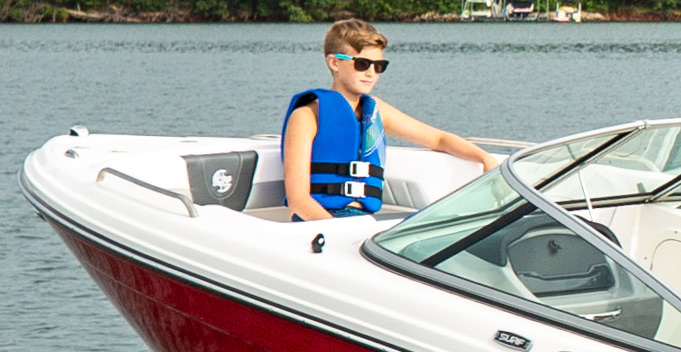 How Challenging it Can be to Capture Promotional Images

We are not throwing anybody under the bus. We have at least some concept of how hard it can be to get “perfect” images for the media while also:

Completing the check list above while showcasing your products in riveting images within the time allotted takes a special breed of people. Our hats are off to them.

It is easy to imagine how an unsafe photo could find its way through now and then. Some businesses have multiple people review their product press images for safety against a checklist. They can still get caught by something not on their checklist. We suspect it is best to have as many people review the images as practically possible.

Our Previous Coverage of Media Photos

We first wrote about attention to safety in boat media photos back in 1997 at IMTEC when Zodiac put some information about their efforts to quietly showcase safety in photos in their their press kits.

Since then we have written about some advertising images getting out of hand. For example, we covered some questionable marketing images by Yamaha, mostly outside the United States in 2014.

Those looking for some tips and checklists to make sure their photos show safe practices may find the National Boating Safety Law Administrators NASBLA seal of safe boating practices checklist for media materials helpful.

In Brunswick’s defense, we have heard Mr. Pete Chisholm of Mercury Marine speak extemporaneously at the National Boating Safety Advisory Council (NBSAC) of Mercury’s efforts to make sure their media / press photos show safe operation at NBSAC as he compared some modern media photos to those from long ago. The industry is doing much better than they did in the past.