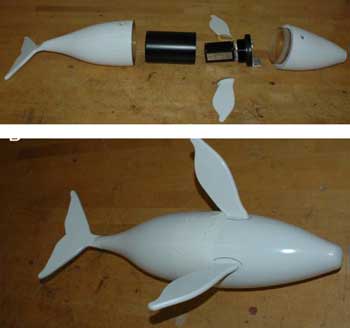 We recently came across some hydrodynamic studies of whale interactions with ships, ship hulls, and ship propellers. One study was done at Carderock (the U.S. Navy lab facility we earlier suggested as a possible location to do full scale interaction studies with small boats). In the whale ship interaction study, they used a scale model of a huge containership with an elliptical bow bulb along with an instrumented model of a right whale.

The study is cited below.

Several quotes in the journal are strikingly similar to the needs of propeller guard hydrodynamic studies. The abstract contained the quote below:

“Factors influencing the incidence and severity of ship strikes are not well understood, although vessel speed appears to be a strong contributor. The purpose of this study was to characterize the hydrodynamic effects near a moving hull that may cause a whale to be drawn in or repelled from the hull, and to assess the acceleration exerted on a whale at the time of impact.”

They went on to say The model whale accelerations increased with increasing vessel speed, were not dependent on the whale’s orientation with respect to the vessel, and decreased exponentially with separation distance from the ship’s track (center line). The also tried submerging the whale one to two times the ship’s draft. In those experiments there was “a pronounced propeller suction effect, a drawing of the whale toward the hull, and increased probability of propeller strikes…”

The researchers recognize that acceleration is a proxy for impact severity, but are a guide for future work in this field. They present a heuristic chart of the hydrodynamic field around a ship hull as it passes.

In the first series of tests, they assessed the hydrodynamic responses of the whale model at different offset distances (like CED with the chines at SUNY, except they did not have a vessel), and orientations with respect to the vessel’s track (CED did not have a model of a body and thus was unable to perform orientation studies). Ship data and video were obtained throughout the encounter (like CED did except they did not have a vessel). Ship speeds were set from equivalents to 5 to 25 knots in 5 knot increments (like CED varied drive speeds). Tests were performed at scaled distances of 0, 20, 40, and 60 feet off the center line (like CED did).

Similar tests were ran while submerging the whale model in the second series of tests.

The author’s discussion of responses of the behavior of the right whale model in the surface and submerged tests (absent actions by the whale itself) provide considerable insights into the dangers involved in the different configurations. They close by drawing a risk chart based on the whale’s position from the track of the ship’s center line.

The researchers studied both collisions with ships and propeller strikes. We feel their methods deserve study and consideration as a possible approach to investigating the hydrodynamics of humans struck or nearly struck by boats, marine drives, propellers, and propeller guards. Yes, we are aware humans have limbs. The right whale study included several comments and general observations about how the body and certain sections of the whale model interacted with the ship. Those same kind of insights could be gained from a model with limbs.

A goal of the 1995 “research was to determine through computer modeling whether a whale can be drawn into a vessel as result of hydrodynamic forces, and if so, under what circumstances this might occur.” When two large ships pass close to each other they are often pulled toward one another. The 1995 researchers adapted the equations and software used to study this effect to the study of the interactions of ships with right whales.

Much of the math, programming, and basic hardware to do these tests (as in the 2010 research) with scale model vessels and scale model people has been done. Carderock’s huge facilities may even allow full scale experiments with small boats.

On several previous occasions we have noted propeller scour and ship squat studies but never really been able to find any research that seemed directly applicable to propeller guards and the hydrodynamics behind a boat operating in shallow water. That is until now. The U.S. Army Corps of Engineers (USACE) has a project titled, Improved Numerical Modeling of Vessel Hydrodynamics and Sedimentation Effects of Waterways. The project focuses on sedimentation entrainment around propellers and vessels in shallow water. USACE focuses the model on the terrain and allows models of ships/boats to pass through the area and studies changes in sedimentation. Their software ADH (Adaptive Hydraulic program) has a mesh that automatically refines itself as ships pass (like studying people in the water as a boat passes by). The software also includes several modules that can be called as needed. While this work does not look as quickly transferable to propeller guard interactions with people as the right whale studies, it may be easier to access due to the existing connections between USCG and USACE.

In a Perfect World

We suspect many of these researchers (CED, those modeling ship/whale collisions, and USACE waterway sedimentation modelers) are on the east coast. In a perfect world, it would be nice to get several of them in a room talk about boat propeller accidents, show some of the work CED has done, then let them visit together about how the things they have done and the facilities they have used that might be brought to bear on the project of better understanding the hydrodynamics of people in the water near boats, propellers, and propeller guards.

In the absence of that happening, free to really cheap desktop video conferencing software could bring the group together.

We are not saying either of these groups (right whale study or the sedimentation researchers) are the end all to better understanding propeller safety. We are just saying they look like they MIGHT have a lot of insights to share that could be useful to those trying to better understand the interactions of human bodies near boats and propellers.