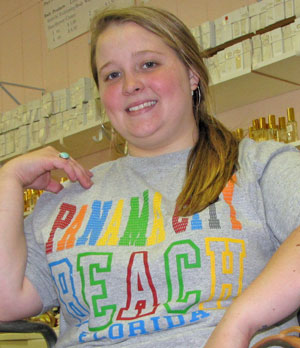 Molly Moses, 16, was boating on the Tennessee River at Lake Wheeler shortly before midnight Friday 31 July, 2009. She was with her father, Brian Moses, and a family friend in an 18 foot fishing boat near Findley Island in Morgan County, Alabama.

They were returning from a fishing trip, the boat lurched hard to the right for some unknown reason, Molly and the family friend (a 25 year old male from Hartselle) were ejected. Brian Moses said the steering wheel helped him stay on board. Molly Moses’ leg was nearly severed by the propeller. Her father dove in to help, and the family friend came to her aid as well. Her dad used his shirt as a tourniquet to help stop her leg from bleeding.

Some nearby bowfishermen helped get her to shore. At least three calls were made to 911 which helped make sure medical care was at the harbor when they made it to shore. Two were made anonymously by someone viewing from shore, the third was by someone at the boat launch when they arrived.

The calls were really helpful, because the Moses’ phones and the phone of the gentleman with them in the boat were not functional after they jumped in to help her.

A few minutes after Molly arrived at the dock, paramedics had her out of the boat and were inserting intravenous fluid lines.

She was life flighted from a parking lot near Ingalls Harbor to Huntsville Hospital. Her mother beat the helicopter to the hospital.

Doctors operated for about 18 hours in an attempt to save her leg. Saturday afternoon they were waiting to see if the blood would start flowing and Molly could keep her leg.

Calls quickly went out online for “Miracles for Molly” and many sent their prayers online in boating forums and other gathering places. Her mother, Polly Moses, also called for prayers for Molly to keep her leg.

Molly suffered deep cuts to her upper left leg and less severe cuts to her ankle. Doctors grafted another artery in to replace the portion of an artery in her left thigh going to her lower leg. Her pulse showed that operation was a success.

Then doctors waited to see if nerves in her leg would begin to respond. They said if her nerves did not begin to respond, they would have to remove her leg to prevent infection from spreading to the rest of her body.

On Sunday August 2nd, Molly Moses was responsive and could squeeze her parents hands.

Photos show what appears to be a 150 HP Mercury outboard motor on the boat.

Alabama Marine Police suspect the boat may have struck a submerged log.

Molly Moses and her family are very grateful for all who helped in her rescue, including: those that called 911, fire fighters, rescue workers, nurses on the helicopter, and doctors that operated on her.

A Life-South blood drive was quickly organized as she received 50 units of blood in the first few days (the equivalent of 5 transfusions).

More than 120 friends and family members came by the hospital on Saturday to check on her. Some started the “Miracles for Molly” site we mentioned earlier. By 6pm on Sunday, the site had over 500 members.

Friends were also raising funds for her medical care by selling “Miracle for Molly” rubber bracelets.

The dates below are generally the dates of media reports. The actual events often happened a day or two earlier.

Molly has faced tremendous challenges, but does give back to the community in several ways. Her positive spirit inspires many, and her efforts with LifeSouth Community Blood Centers have encouraged many to give blood.

5 December 2013 – sometimes young people go through horrendous propeller accidents and come out being an inspiration to us all. We think they can do no wrong. We forget they are human just like the rest of us. Some stumble and make very serious mistakes. It appears that may have happened in the instance of Molly Moses. WHNT reports the police arrested her 4 December 2013 for selling marijuana on three occasions. We have seen some other propeller victims fall prey to recreational drugs and worse. We wish her the best and hope Molly gets the help she needs to turn her life around if these reports turn out to be correct. We especially appreciate the work she did encouraging blood donations at LifeSouth Blood Centers. Its a good time to return to one of the slogans used after her accident, and pray for “Miracles for Molly”.