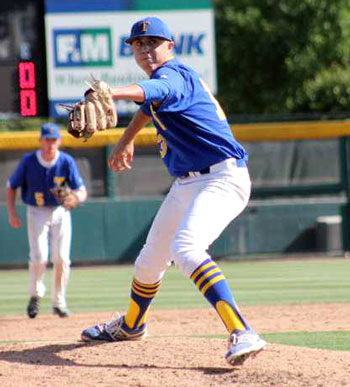 Tyler Murphy, a recent graduate of Turlock High School, was on Lake Tulloch near his parents home in Turlock California on August 8, 2013. He and some friends were with a boat. Tyler’s right leg and hand were struck by the boat’s propeller. Details surrounding the accident are still very sketchy.

Tyler Murphy wrapped up his high school baseball days as a pitcher earlier this year and was just one week from going to St. Mary’s College to play collegiate baseball when he spent a day at Lake Tulloch with friends.

Tyler was life flighted to Memorial Hospital in Modesto and spent 18 days there (per the Moultrie Observer). He has had six surgeries (per a report in the 19 September Moultrie Observer) and may have more. The surgeries included grafting some skin from his grandfathers leg to Tyler’s injured right leg, and repairing Tyler’s injured right hand. Later reports say his right leg was cut from his upper hamstring to his ankle.

Tyler Murphy’s parents, Tony and Lori Murphy, are praying for his recovery, and also hope he may one day be able to return to baseball. His father Tony played shortstop for Moultrie High in the early 1970s.

A report in the Turlock City News covered Tyler’s return home after 26 days in the hospital on Monday September 2, 2013. They also report that St. Mary’s College will redshirt Tyler this year and hold his scholarship for him to come back in 2014.

Turlock Journal quoted Tyler back in November 2012 when he signed with St. Mary’s as saying:

“Playing baseball, it’s what I’ve always wanted to do. It’s been a dream since I was little.”

They went on to note that Tyler had always followed St. Mary’s, and they recently built a new baseball field. He chose St. Mary’s in part, because he hoped to be able to play right away there, vs. being redshirted for a year at some of his other opportunities.

Friends and community have rallied around Tyler and his family, forming Team Murphy to hold several fundraisers in his behalf.

Tyler’s parents say they are optimistic about his recovery. The doctors say he is young and has a great attitude. But Tyler will have to undergo and extensive and difficult rehabilitation.

We hope these examples provide a little inspiration to Tyler Murphy, his parents, and other athletes facing similar challenges. First, Tyler Murphy survived (some did not), second, others have made it back to play competitive sports at the highest levels, and third, some who did not regain their competitive edge were still motivated by sports and motivated others by their efforts.