This post opens with a discussion of the ineffectiveness of kill switch lanyards because almost nobody uses them, then reports on a special control lever created by Vermeer to detect operator presence with potential application to passive (fully automatic) boat kill switch applications. 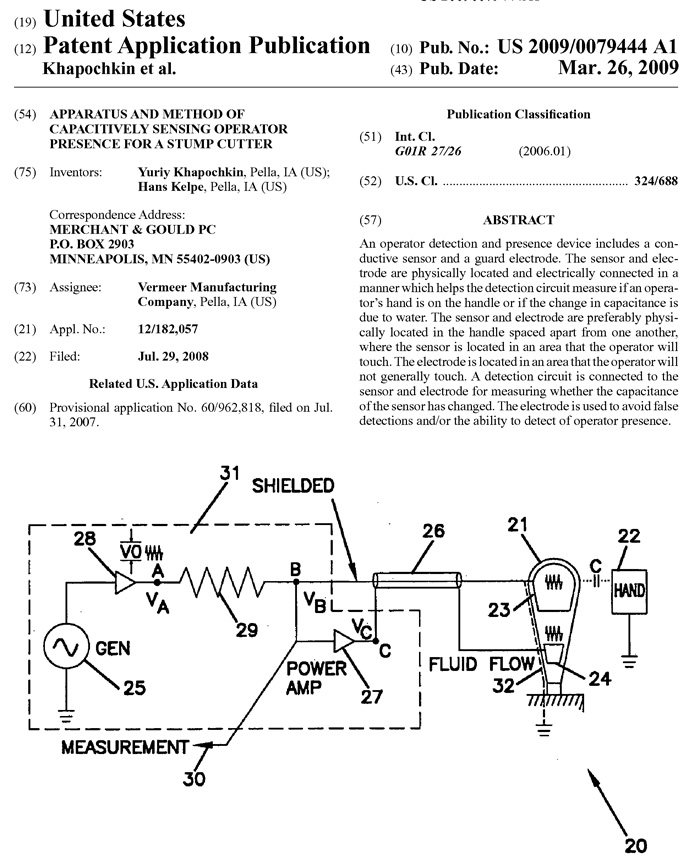 The boating industry has talked about increasing kill switch wear rates since the 1970’s. Wear rates are obviously dismal and the industry has yet to ever even measure kill switch wear rates. A Brainerd Dispatch (Minnesota) 1 July 2016 article about a kill switch preventable boat propeller accident titled, “Saved by a kill switch” in which the person was in fact seriously injured when the boat repeatedly ran over her in the Circle of Death, opened with “A safety feature on motor boats that most users might not even be award of could have prevented injuries in an incident ….” The article goes to quote Pete Chisholm, Mercury Marine Product Safety Manager, as saying, “not many people use safety cords in general, but their use “absolutely” could have prevented ….”

In 2007 the State of Nevada passed a mandatory wear law requiring the use of kill switch lanyards. Per a March 20, 2012 letter to the U.S. Coast Guard we obtained using a Freedom of Information Act request, excluding PWCs, Nevada estimated their initial compliance in 2007 at 2 percent. By 2012 Nevada Department of Wildlife was proud their education and enforcement efforts increased wear rates to an estimated 10 to 12 percent. Nevada post mandatory kill switch use law wear rates indicate the mandatory regulations USCG continues to mention are in the pipeline may not have the effect everyone is counting on if they ever see the light of day.

Yes, we know there are several virtual lanyards on the market (MariTech’s Virtual Lifeline, CAST, Autotether, CoastKey and more). Wireless lanyards allow the boat operator to freely move around the boat, but do require the operator to wear a battery powered fob and to engage the system each time they use it.

We suggests its time for a totally automatic system. One in which the operator does not have to wear a fob and when the boat is started, the system is automatically engaged. This type of system would not be meant as a replacement for kill switch lanyards, but as a supplement to provide at least some level of protection to boaters not currently attaching kill switch lanyards (most boaters).

Back in 2010 we proposed a Circle of Death invention in which we identified several ways to detect an unmanned boat was circling. Below we add a related invention to that list.

A boat throttle lever that detects the presence of the boat operators hand could be used as a supplement to the existing kill switch system.

More specifically, a throttle lever that requires the presence of the operators hand when the boat is shifted into forward gear and the RPM exceeds some minimal setting such as 1500 RPM. Operator’s manuals already tell boat operators to keep their hand on the throttle when underway in order to quickly respond to hazards in the path of the vessel. A throttle lever that required presence of the operators hand, but still allowed the operator to temporarily remove their hand for “x” seconds before alerting the operator the system would be stopping the boat if they did not return their hand within “y” seconds to the throttle, and then stopping the vessel would stop the Circle of Death. Potential applications include tiller steered outboards and bass boats without foot throttles. (Foot throttles slow the boat to an idle if the operator is ejected.

As to how this could be accomplished, Vermeer, long known for manufacturing yellow trenchers, round balers, stump cutters, and rental yard equipment, has such a system on its walk along stump cutters.

A November 2009 article in Professional Safety titled, “Machine Safety: Developing an Operator Presence System” tells the history of its development.

In 2001,the National Institute for Occupational Safety and Health (NIOSH) became interested in developing a passive operator presence system, one that did not require the operator to engage the system. NIOSH worked on the system a couple years and announced in Federal Business Opportunities they were looking for an industrial partner manufacturing wood chippers in 2004. Vermeer responded, challenges in applying the technology to wood chippers turned the partners focus to stump cutters. 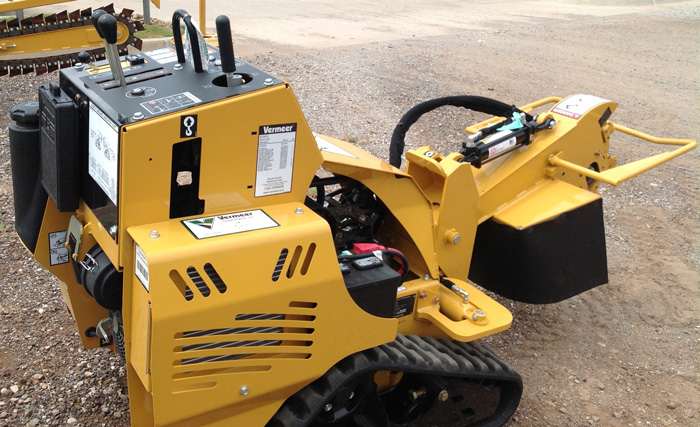 The project was presented at the 2008 NIOSH research symposium in Pittsburg Pennsylvania showcasing the success of NIOSH teaming with industry to develop new product safety technologies.

The project resulted in at least two patents:

Similar to the boat propeller application, Vermeer is concerned stump cutter operators will leave the safety of the operator’s station and move to the a dangerous area near the stump cutting wheel (the propeller in the boating application) when the cutter (propeller) is in operation. In Vermeer’s instance, some operators leave the operators station and approach the cutting wheel to better observe the operation. While in the boating instance, the operator is ejected and struck by the propeller as the boat passes over them or circles in the Circle of Death.

Just like the boating application, Vermeer was concerned about the use of capacitance system in a wet environment (like in the rain). A special design detects presence of the operators hand, even a gloved hand, and does not issue false positives in the rain. 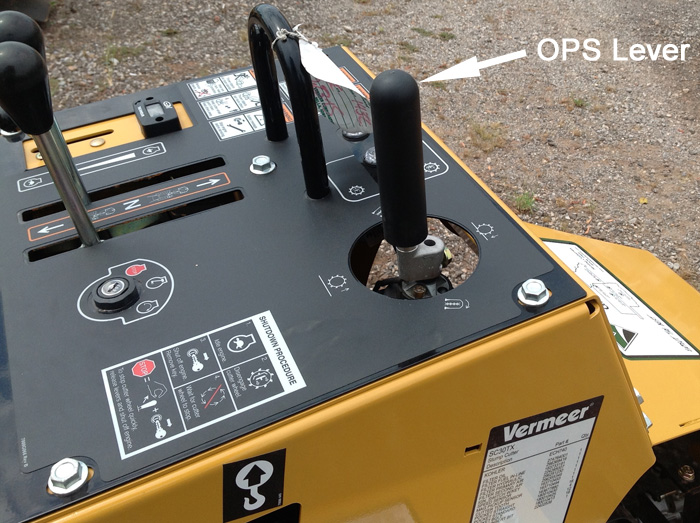 Oklahoma City Vermeer Great Plains dealership was kind enough to show me a Vermeer stump cutter on tracks, the SC30TX, and to explain how the system worked fully knowing I was asking about boating applications and they had little chance of selling me a stump cutter.

The handle itself isolates / insulates the handle portion of the lever from the portion that attaches to the joystick control in order to better sense capacitance.

Per the article in Professional Safety, Vermeer prototypes used the Electric Field Imaging Device from Motorola, MC33794, packaged by Freescale Semiconductor in a Engineering development kit.

We encourage the boating industry to investigate technologies used by Vermeer OPS and others that could be used to create a passive system reducing the number of kill switch preventable deaths.

When an industry (such as the boating industry) knows certain events will occur hundreds of times per year (such as boat operators will be ejected from recreational boats) and that industry totally relies on consumers to take a specific action to prevent an accident that might occur during that event (attach kill switch lanyard to prevent Circle of Death boat propeller strikes when boat operator is ejected) AND that same industry knows over 90 percent of consumers will not take those actions (will not attach kill switch lanyards), many would call that irresponsible on the part of the industry. However, the industry calls it irresponsible on the part of the boat operator. Instead of arguing about who is irresponsible, we suggest the industry eliminate the problem by installing a passive system.

From Yamaha’s comments below we are not sure the industry knows what a passive system is.

Boating safety takes many forms. For example, the U.S. Coast Guard® recommends everyone aboard a recreational boat wear a personal flotation device at all times. The introduction of compact PFDs has been beneficial in increasing this safety practice among America’s boating public. Another example is the kill switch lanyard worn by the boat operator that turns off the engine(s) should something happen that forces him/her away from the helm. These are passive safety devices that can save lives,

We hope Yamaha’s comments are an anomaly, and that we will see industry action toward true passive kill switch systems in the future.