The $200 million dollar verdict in Batchelder vs. Malibu Boats was reaffirmed July 18, 2022. One reason for such a large verdict was Malibu’s lack of a Post Sale Safety Monitoring system in which they actively sought out accidents involving their boats and addressed Post Sale safety issues.

An order by the Judge denied the various points raised by Malibu against the original verdict.

One of those points was that Malibu was not allowed to bring up in trial that there were no previous similar accidents.

Polson Enterprises was involved in identifying previous water over the bow Malibu accidents in BARD (the U.S. Coast Guard Boating Accident Report Database), in the news media, in social media, in the Malibu Crew online forum, even back in the days of USENET rec.boats and rec.sports.waterski, and otherwise available to Malibu.

While that information did not make it into the actual trial, the judge mentioned it in the order addressing issues raised by Malibu. 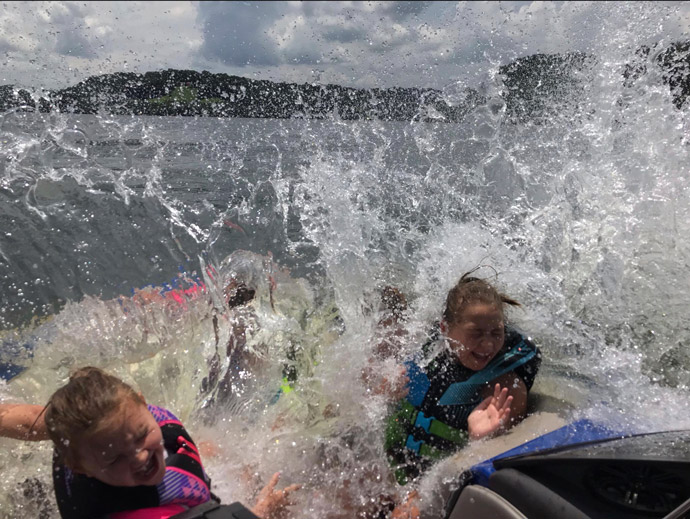 Note, our coverage of other elements of the Judges Order is at Batchelder vs Malibu: $200 million jury verdict stands.

The portion of the order pointing out Malibu’s lack of Post Sale Monitoring of Product Safety is contained within pages 71-73 of the link provided by Clark, Fountain, LaVista, Prather & Littky-Rubin, the legal firm representing the family along with Drew Ashby at the Ashby Firm, now known as ATL.

This post begins with quotes from the judges order. It ends with tools that can help boat manufacturers monitor the safety of their boats in the field. Post Sale Monitoring allows boat builders to build safer boats and document their efforts.

Malibu wanted to present there had been no previous accidents similar to this one.

“The issue arose due to a line of deposition testimony offered by a few Malibu employees, which was best exemplified by Malibu CEO Jack Springer: “through thousands of boats we have sold of that nature, through tens of thousands of people that have driven it, to hundreds of thousands of hours on that boat and that model of boat, we never had a problem. … when Plaintiffs followed up on Malibu’s analysis about this issue, Mr. Springer admitted that Malibu did not know how often customers use their boats, how long they use them, how they use them, when they use them, or in what manner they use them.

Mr. Springer further admitted that Malibu has no way of knowing any sort of data about how users or customers use Malibu boats. In addition, Mr. Springer conceded that Malibu had never sought to learn about incidents of any kind, including swamping incidents, in any of their boats. Instead, Malibu employees testified that their sole source of information about the lack of any other incidents is that it has no record of any such incident being reported. And Malibu’s employees expressed confidence any user or customer who experienced swamping would report it directly to Malibu.”

“But a sober analysis of the evidence in this case demonstrated how problematic that is here. When pressed about whether there have truly never been any reported incidents of swamping, Mr. Springer testified: “Not to my knowledge.” And therein lies part of the problem. Malibu does not keep records of incidents and it does not take any steps to learn about them, or about how its boats perform in the real world. And this bore out in the evidence Malibu did not review organized and publicly available data to learn about whether its boats were involved in swamping incidents (or other kinds of incidents). even though it was aware of its ability to do so.

Mr. Springer testified that he believed that there was nothing about Malibu swamping incidents in the database because he hadn’t heard that anyone reported one to Malibu. Yet there are numerous instances of Malibu boats swamping in the BARD database. Docket 564, Exhibit 7, Deposition of Gary Polson, pp. 80-81. And there were numerous instances in discovery where Plaintiffs presented instances of other swamping incidents to Malibu and Malibu employees knew nothing about it. That was true even when the information about those incidents came from internal Malibu e-mails, and from an online forum setup by Malibu itself called the Malibu Crew website.

In fact a 2007 swamping incident in Ohio involving a 2004 Response LXi resulted in a young boy who was wearing a life jacket, being washed out of the bow, going into the path of a spinning propeller, and being killed. The incident (known as the Kruesch accident) was reported in the news as well as the BARD database but Malibu had never hear about it.”

A Good Place to Start

A good place to begin thinking about setting up your own post sale product safety monitoring program for recreational boats is to look over our Post Sale Monitoring Chart below. 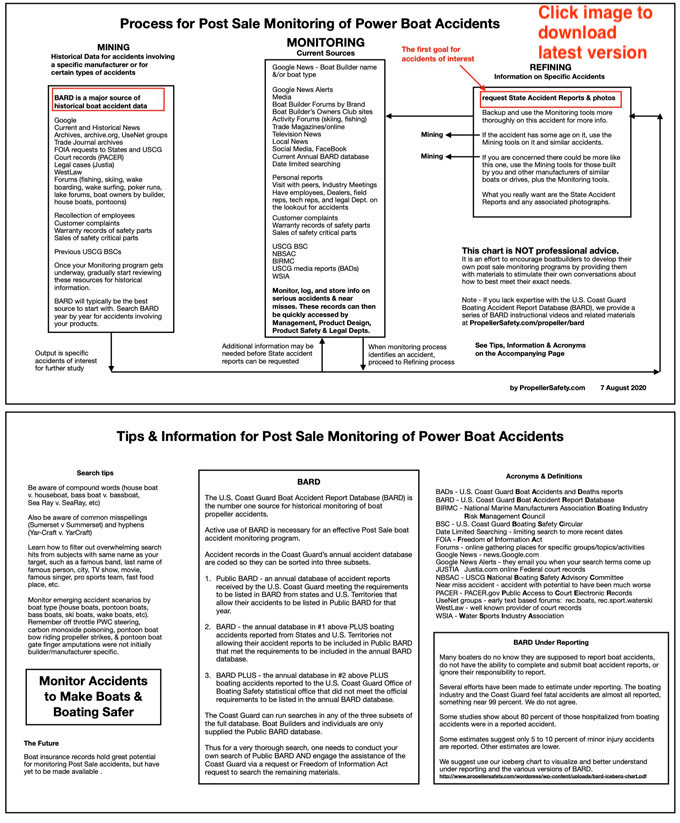 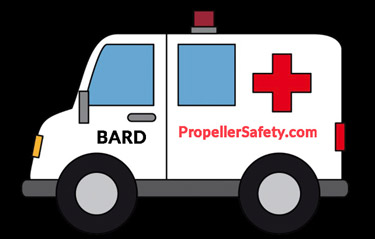 Over time we have developed a several tools for monitoring boat post sale safety. Some of them are listed below:

How Many Malibu Accidents Were There?

Returning to this portion of quote from above:

Mr. Springer testified that he believed that there was nothing about Malibu swamping incidents in the database because he hadn’t heard that anyone reported one to Malibu. Yet there are numerous instances of Malibu boats swamping in the BARD database. Docket 564, Exhibit 7, Deposition of Gary Polson, pp. 80-81. And there were numerous instances in discovery where Plaintiffs presented instances of other swamping incidents to Malibu and Malibu employees knew nothing about it. That was true even when the information about those incidents came from internal Malibu e-mails, and from an online forum setup by Malibu itself called the Malibu Crew website.

Mr. Springer went on to say that it would be his belief that if you searched BARD for Malibu accidents of any kind, none would be listed.

While using Malibu as an example in our third BARD training video for boat builders I created this spreadsheet of 32 Malibu Boats 2018 Public BARD reported accidents. Several of these accidents list “Flooding/Swamping”, “Capsizing”, or “Sinking” as one of their accident types.

Note these are in Public BARD, the accidents states have agreed to make public. California does not allow its boat accident reports in BARD to be public. With Malibu originally being in California and California being a major boating state, many Malibu accidents are invisible in Public BARD. A Freedom of Information request to the U.S. Coast Guard asking them to characterize the 1988 BARD reported accidents not visible in Pubic BARD will produce many more BARD reported Malibu accidents.

The spreadsheet link above is an example of a tool a boat builder could create and use to sort through their accidents, to see how many fatal accidents they had, to see how many accidents fell into specific categories of accidents, etc. Once a specific accident was identified to be of significant interest, a copy of the state boating accident report could be requested depending upon that particular state’s process for furnishing or denying access to them.

Malibu, said to be the world’s largest manufacturer of tow boats, made no efforts to monitor the post sale safety of their boats.