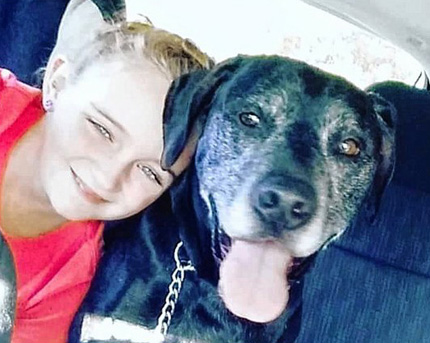 Kaelynne Driscoll and her dog, Ditch

Kaelynne Driscoll, an 8 year old girl, was riding an inner tube with her father, Christopher Driscoll, on Wednesday 6 July 2016. They were tubing on Skaneateles Lake in Onondaga County New York behind a 17 foot Bayliner boat. The tube struck a wake, she and her father fell from the tube, the boat, being operated by Kaelynne’s step mother (Jamie Wheeler), circled back around to pick them up, and both were struck by the boat’s propeller.

Authorities were first called a little before 6pm.

Two Good Samaritans boating nearby (Eric Marcinkowski or Syracuse and David Goetzmann or Skaneateles) pulled them from the water and took them to shore at the State Boat ramp near A41 where they were met by first paramedics and taken to Upstate University Hospital in Syracuse New York.

The Good Samaritans later told their story to localsyr.com They had only been out a short time when they heard screams. Marcinkowski went to a nearby swim platform where he grabbed Kaelynne from her father. Her father was trying to hold her up as her life jacket had been cut off by the boat propeller. As Marcinkowski pulled the girl from the water, he started wrapping her in towels to try to slow down blood loss, while he tried to keep her head steady. Goetzmann quickly drove them to the boat ramp where paramedics had already arrived.

Kaelynne had been struck in the head, arm, and leg.

Several regional news outlets followed up on Kaelynne’s condition a couple weeks later. Syracuse.com reported the young girl had undergone hours of surgery, and nearly died three days later when she underwent biphasic respiratory arrest. As of July 19th she was off breathing tubes and able to talk. Kaelynne lost her left leg above the knee and her left arm above the elbow. She is having problems with her brain swelling, has undergone rounds of brain surgeries and remains sedated.

Kaelynne’s father was released from the hospital 3 days after the accident.

Her family expresses thanks to everybody for all the community support.

Kaelynne Driscoll is described like many young girls, she is energetic, loves playing soccer, likes horses, hiking, school activities, and loves her dog, Ditch. (per Syracuse.com)

Friends and supporters formed a Facebook group, Kaelynne’s Army to help support Kaelynne and her family during this time of need. Several projects are planned to raise funds for medical costs.

A GoFundMe page has been setup for the family.

Healthy young children are very resilient, but after having followed the recovery of almost countless children from propeller accidents we have learned it is incredibly challenging for them and for their family. We encourage them to celebrate the little victories that have been celebrated by other families in similar situations (when certain medical parameters come under control, their solid food, their first hamburger, etc.) For now, its a few hours or a day at at time. We thank all the local citizens and businesses standing by Kaelynne and her family.

Its a long road that will not end in full recovery. But strong young people inspire their families and many of the rest of us when they courageously face these challenges.

Some Other Young Children Struck by Boat Propellers

A few children under 11 years of age injured or killed by boat propellers we have posted coverage of include:

As you review the list of accidents involving children listed above, you will notice most of them involve fatalities. The news media typically only covers fatalities of children in depth (provides names and details and follows up on the story). Young children non-fatally struck are often just listed in news reports as a so many year old boy or girl and there is never a follow up story.

The news media does sometimes provide names and follows up on tweens and teenagers injured by boat propellers. Those stories are often very inspiring.