A Discussion of the History of Log Strike Testing at Mercury (Kiekhaefer Corporation), Kiekhaefer Mercury, and Later at Mercury Marine, a Brunswick Company

Please be sure to review Part 1 before reading this section. In Log Strike Testing Part 1: Log Strikes and Log Strike Systems we review what happens during a log strike and systems designed to dissipate these impact loads.

Here in Part 2 we discuss methods used to test log strike systems to make sure they are properly designed to accommodate loads generated at maximum design speeds, that production units meet those design criteria, and that accessories (like propeller guards) do not cause issues during log strikes.

Extreme dangers presented by outboards flipping back into boats and the need for a boat to be able to keep going after striking submerged objects, led Mercury to conduct log strike tests to make sure their log strike systems function properly.

By the mid to late 1950’s Carl Kiekhaefer of Kiekhaefer Corporation began log strike testing his Mercury Marine outboard motors. Kiekhaefer was known for producing rugged, reliable, outboards and delighted in showing off his products against the competition.

Among the earliest documentaries of Mercury log strike testing of outboard motors, or log jumping as a means of testing outboards is the film below.

It shows the successful log strike testing of a Mercury outboard, but “motor E” (obviously an Evinrude) does not fare so well and actually flies into the test boat at about 4:45 to 5:30 on the timer.

The video was taken at the Kiekhaefer Mercury Proving Grounds at Siesta Key, just off the coast of Sarasota Florida.

We cover the history of this log strike video in-depth at Log Strike Testing – 1950’s Mercury Video. As we note there, this video was probably shot in late 1956 or during 1957.

In 1957 Kiekhaefer Corporation acquired its famous Lake X test site in Florida (actually Lake Conlin). Log strike testing was performed there for many years on both stern drive boats and outboard boats. As things progressed, they hauled in machined logs of a specific tree type, machined diameter, and machined length from Wisconsin for consistency. Tethering was improved too. They suspended a railroad rail below the log to help sink it to the required depth, plus they tied a float to each end of the rail. The floats bobbed on the surface to indicate the log’s position.

We have few images of these Lake X log strike impact tests. We ran one through some filters to give viewers an artistic view of the setup. 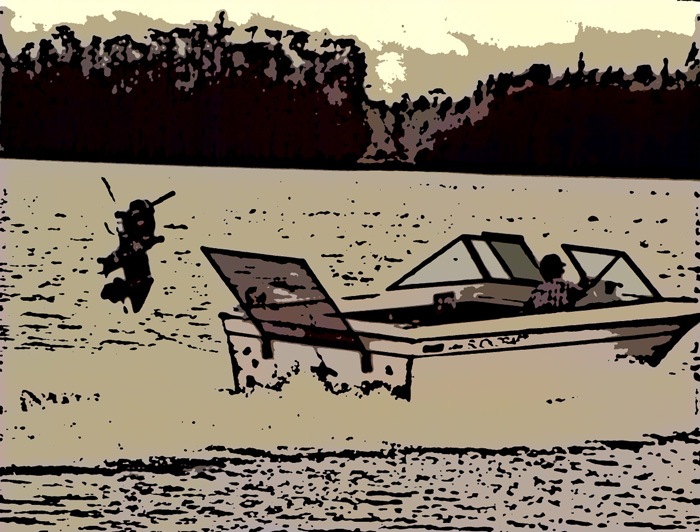 Note the screen on the rear of the boat to prevent the drive from rotating back up into the boat. And yes, that is the drive, a stern drive, way up in the air behind the boat.

As Mercury continued to refine the log strike test process, they saw an opportunity to create a log strike test stand. A test stand would be much safer for their operators, more consistent, allow the capture of high speed video, allow retrieval of broken small parts for failure analysis, and be located much closer to Mercury engineering and production facilities.

The test stand consists of a transom with the motor appropriately mounted to it along with a simulated log. The transom and motor stay put while the simulate log (we used to hear it was a block of lead) is propelled at the drive. The transom and drive are allowed some freedom to bobble around during a strike, as they do when they are on the water.

The setup can be seen in a series of photos above provided in Mercury Marine’s Outboard brochure “Look Deeper” effective October 2008.

Still photos do not give the test stand justice. With its horn going off to warn of an impending test, and the simulated log shooting down the track toward impact, it is an impressive test fixture.

Mercury’s Outboard Reliability web page used to host a video of the log test, we see the same or a similar video was submitted in a 2011 MercFilms.com contest sponsored by Mercury Marine.

From the video, you can see the boat / transom is allowed some freedom to move around a bit, just like a boat is during a log strike.

Below is a small clip from an old Mercury Marine log strike test request for litigation testing.

Now, Mercury Marine is considering going one more step, computer simulation of log strike tests. The ability to simulate log strike tests would allow them to conduct “virtual log strike tests” before a drive was even prototyped. This lets Mercury Marine, MerCruiser, and other Brunswick companies compress design time, and prevents having to go way back to the front and start again if they drive design fails. They can still conduct conventional log strike tests to verify the results once drives are physically built, but numerical simulation can give them a good quick check of early designs.

The technical paper details the 4 stages used to develop the simulation.

For each stage above, developers designed and built the experiment, conducted the physical test, built a Finite Element Analysis (FEA) model, ran the simulation, and compared results of the simulation with those of the real world logstrike test stand. High speed video of the log strike tests was also used along with instrumentation of key variables to compare with the simulation.

An impact plate of “Material A” was used to represent the log. The amount and shape of deformation of the bar (bent in horseshoe by leading edge of the drive during impact) was compared to the virtual impact bar in the simulation.

Failures observed in the final stage model were consistent with those in real world testing and they happened within about ten miles per hour of the corresponding real world speeds.

As soon as outboards started getting more powerful and boat speeds began to pick up, boaters began hitting stumps, logs, rocks and other submerged objects at outboard motor and transom threatening speeds. The industry first responded with a manual trim pin system that allowed small outboards to swing up on impact and settle back down to the pin. As drives started to increase in speeds, the industry turned to shock absorbers to dissipate log strike impact loads. Drives continued to get larger, heavier, and faster. With the addition of hydraulic trim and tilt systems on heavier outboards, the industry modified trim cylinder hydraulic systems to absorb loads generated by log strikes.

While Mercury designed log strike systems to protect the boat and drive, they needed to prove those systems could protect boats and drives in the real world. Mercury (Kiekhaefer Corporation) turned to on-water testing. They ran boats over submerged telephone poles, then later over “calibrated logs”.

Test results from Mercury’s log strike test stand have often been used in court to defend their position against the use of propeller guards (guards did not hold up through the log strike test).

Now Mercury is evaluating virtual log strike testing by using Finite Element Analysis models to test prototypes before they are ever built.