Anderson County Sheriff’s Office (ACSO) in South Carolina was conducting on water training exercises in conjunction with the U.S. Army Corps of Engineers (USACE) on Lake Hartwell in the Singing Pines Recreational area near Starr South Carolina on Thursday 1 June 2017. ACSO Deputy Devin Hodges and another ACSO person were on a USACE boat thought to have been being operated by a USACE participant in the training exercise.

An accident investigation is underway. For yet to be determined or released reasons, all three people on board were ejected from the 19 foot Pioneer patrol boat. The boat unmanned circled in the Circle of Death and Officer Devin Hodges was fatally struck by the propeller. 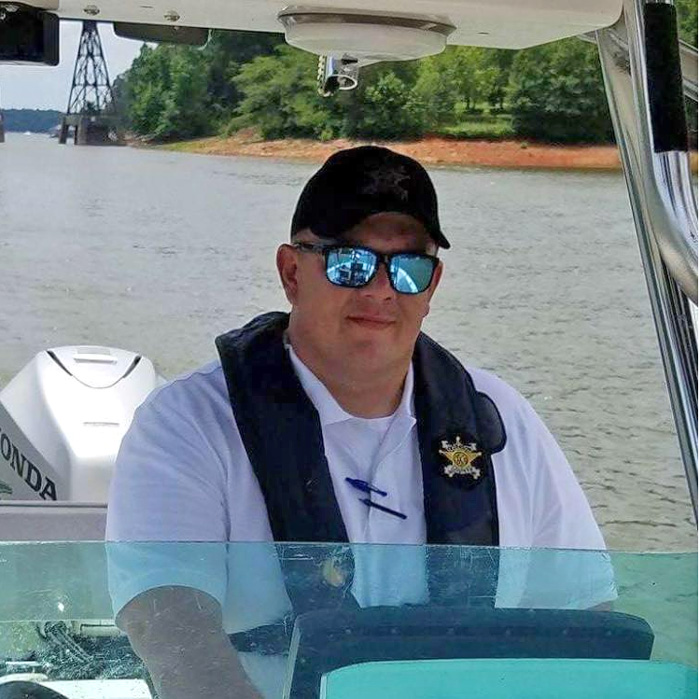 Some reports say he was struck in the head.

The latest updates are near the bottom of this post (just before the comments).

No mention has been found of efforts to stop the circling boat or if it stopped on its own.

The accident happened about 9:30 am. Everybody was wearing life jackets. It sounds like they were probably inflatables, and that they all inflated.

Officer Devin was transported by ground to Am Med as were the other two in the vessel. Devin Hodges was originally reported as dead on arrival at AnMed Health Medical Center, but later reports indicate he was pronounced dead less than an hour after his arrival at An Med Health Medical Center. The other two on board were transported to the same facility and treated for shock.

Officer Devin previously worked several other police type jobs in the region and just came to ACSO in January. He was very well liked and was said to have received many atta-boys.

Devin Hodges leaves behind a wife and young children.

As to what might have happened, it is totally speculation at this moment. We will wait for some direction from the investigation before commenting further beyond recognizing it sounds like the kill switch may have played some role in the accident.

I also note we have seen many Circle of Death accidents in which wearing a life jacket prevented a person in the water from diving below an on coming boat. While wearing a life jacket is a great thing to do, if you are ejected and the unmanned boat is circling some have suggested taking it off your life jacket / PFD as quickly as possible, then hanging on to it. This method provides you the opportunity to dive below the oncoming boat if you need to.

2 June 2017 Update part 1 – WYFF4 reports the Coroner released cause of death. WYFF4 says Devin Hughes drowned after his life jacket and clothing became entrapped in the propeller. While Devin Hughes was being brought to shore, he suffered cardiac arrest and was dead in the emergency room less than an hour after being taken to the hospital. (We later found a June 1st article by “The State” quoting the Coroner as saying time of death was 10:37am at AnMed Health Medical Center.)

A “Deputy Devin Hodges Memorial Fund” has been established. Fund may be mailed or delivered in person to any Park Sterling Bank location.

Deputy Hodges patrol vehicle has been placed on the front lawn of Anderson County Sheriff’s Office for those wishing to pay their respects or leave memorials.

DNR appears to report the kill switch was not attached. WYFF4 reports there have been at least two accidents this week in update South Carolina in which a boat kept going after the occupants were ejected. A DNR officer noted a kill switch will prevent this from happening. So it sounds like the kill switch lanyard was not attached during the training exercise at the time of the accident.

We note that many people have been entrapped in open propellers as they have been wrapped up by clothing, life jackets, and/or body parts. Some are listed on our post titled, Entrapped by a Boat Propeller.

Update 2 June 2017 part 2 – Following up on WFYY4’s report of another runaway boat earlier this week, it appears a DNR patrol boat collided with a pontoon boat on Monday (Memorial Day) 29 May on Lake Keowee, the operator was ejected, and that boat also became an unmanned runaway boat. The accident is reported by WYFF4.

There are lots of things left to be determined, BUT if it is found the operator of the DNR boat did not have the kill switch lanyard attached AND the operator of the boat from which Devin Hodges was ejected from was not wearing a kill switch lanyard during the training exercise an opportunity to prevent the second accident was missed. We call that vaccination, when one accident happens nearby and the locals take extra precautions to prevent similar accidents for the next several months.

Update 3 June 2017 part 1 – Independance Mail’s 2 June report was clearer on what the coroner identified as cause of death. Anderson County Coroner Greg Shore said Devin Hughes died an accidental death by drowning. Once he went underwater he was unable to come up. Anderson County Sheriff Chad McBride said he may have been knocked unconscious as soon he was ejected from the boat. While early reports indicated he was struck by the propeller, possibly in the head, the Coroner said the autopsy revealed no significant propeller wounds on his body. The Department of Natural Resources (DNR) is running the accident investigation. Capt. Robert McCullough of the DNR reports the investigation indicates the boat did not hit anything in the water before those on board were ejected. He said they were performing some sort of maneuver, but he did not know the nature of that maneuver.

While the patrol boat may not have been a “flats boat” it does share some design characteristics. We refer the investigators to the recent investigations into end swapping of those vessels as possible reference material. We are NOT saying the vessel was unsafe. We are saying some of the terminology and discussions surrounding those accidents and vessels might be useful in better understanding and describing what happened with this one. See USCG Boating Safety Circular 89 and Boating Safety Circular 90, and ABYC’s The Reference Point Winter 2016 for additional information.

As to this specific vessel, it is highly likely it had a GPS / digital mapping system plus an electronic signal from the outboard indicting engine RPM. A subroutine watching for the boat circling with the engine at higher RPM could sound an alert that it was going to stop the vessel in a couple seconds if no one intervened (such as pushed a reset button indicating someone was onboard deliberately steering in circles at speed). An even simpler system is a pickup on the steering system indicating it is steered to lock in either directions in combination with the vessel speed signal, or an engine RPM signal plus and an in gear signal, plus a timer (so many seconds steered locked to one side at speed implies nobody is at the helm.)

As for current lanyard wear rates, we previously attempted to estimate wear rates using U.S. Coast Guard boating accident data for all accidents in which wear or not wearing the lanyard was reported. The State of Texas is currently considering requiring the wearing of lanyards. Estimates of wear rates there have been as low as one percent per the Houston Chronicle.

Update 6 June 2017 – we posted coverage of the period of morning and his funeral in a post titled, Master Deputy Devin Hodges funeral.