Are Propeller Guard Technologies Being Suppressed by the Boating Industry, Along With Other Propeller Safety Devices?

Many have accused the boating industry of suppressing the development and deployment of propeller guards and other propeller safety devices.

A list of ways in which the boating industry has been accused of suppressing propeller guard inventions, technologies and other propeller safety technologies is provided below. They are grouped by events or topics and partially organized by timeline.

We try to keep the Propeller Guard Information Center / PropellerSafety.com fair and objective on propeller safety issues. However, as is often the case in discussing the suppression of other technologies, this list includes several unproven accusations and claims made by others. We are not saying we believe every single one of these points or that every one of them is true. Several of these points are based on circumstantial or hearsay evidence. You will need to make your own judgement call as to the truthfulness of these statements.

Many of these accusations have been made previously. Those with experience in this field may harbor emotional feelings for or against several of the points made here. To our knowledge this is the first large scale collection of these claims.

For those who feel many of the points made here are untrue, we remind you that for the boating industry to have suppressed propeller safety inventions and technologies ONLY 1 of these over 140 points needs to be true. For the industry to have willfully suppressed propeller guard and other propeller safety technologies you will need to decide how many of them are true and if in your opinion those particular points create the preponderance of evidence necessary to indicate willful intent.

Many of our comments about slowing further development of these technologies hinge on the industry not using the products. If the boating industry began to apply almost any of these technologies, even in a limited way, inventors and designers would begin to make further improvements upon them.

Ways the boating industry has been accused of suppressing development and deployment of propeller guards and other propeller safety inventions and devices:

A major update of Federal boating laws occurred in 1971. It was known as the Federal Boating Safety Act of 1971. It did not require the use of propeller guards.

Lanyards designed to be attached to a boat operators clothing, wrist, life jacket, etc. The other end of the lanyard has a “key” that plugs into the kill switch (emergency engine kill switch). If the operator falls overboard, the lanyard pulls out the “key”, the engine dies, and the boat stops.

In 1988 the U.S. Coast Guard’s National Boating Safety Advisory Council (NBSAC) formed the Propeller Guard Subcommittee to look into the issues surrounding propeller guards and to recommend to USCG any rulemaking they should pursue concerning requiring the use of propeller guards. The Subcommittee delivered its final report in November 1989. 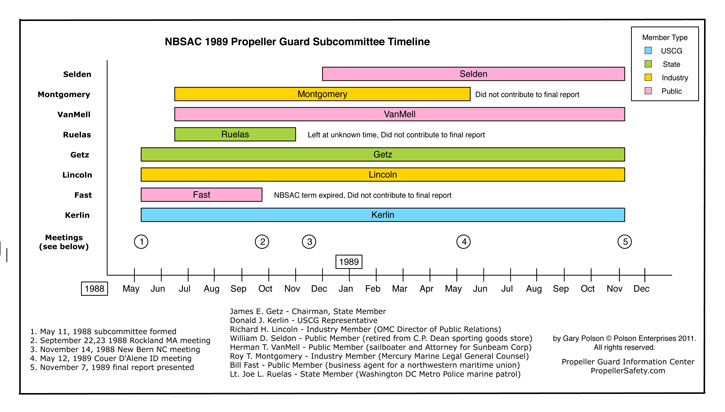 In December 1990, Outboard Marine Corporation (OMC) and Mercury Marine teamed up to test a propeller guard at the State University of New York (SUNY) at Buffalo in their large circular tank.

Congress held a boating safety hearing in May 2001 that focused on several issues, including propeller guards.

The last several years, USCG has been working with contractors to develop a protocol for testing propeller guards. That protocol is now said to be nearing completion.

The Coast Guard reports accidents as a sequence of events (like Event 1 = collided with floating object, Event 2 = fell overboard, Event 3 = struck by propeller). With no pressure from the industry, the Coast Guard continues to print Event 1 statistics in a manner that many reading their annual report interpret Event 1 statistics as representing the total number of reported propeller accidents. We frequently find the media AND the industry itself using Event 1 data to represent the total number of reported propeller accidents. By constantly printing the false low-ball number, the public and media accept them as real and see less need to address the problem.

For example, see the Primary Accident Table below from USCG’s 2011 Boating Statistics (Table 16 page 35). Many people come away from Table 16 thinking there were only 5 propeller fatalities and 55 propeller injuries in 2011 but these are only the statistics for Event 1 accidents (also called Primary Accidents). The total reported statistics provided in Table 17 (page 36) of the same report indicates there were actually 35 deaths and 192 injuries. 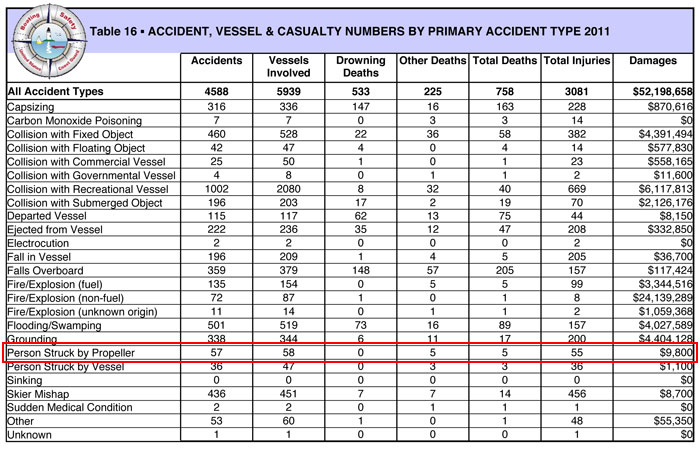 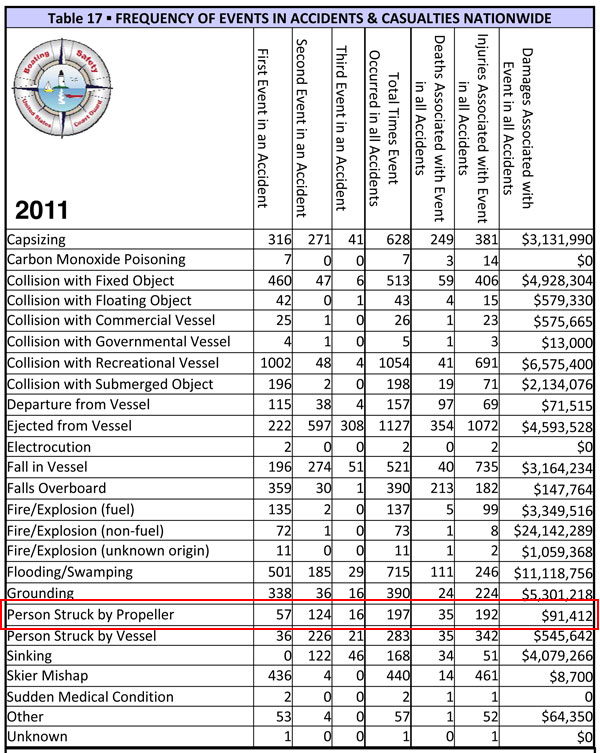 Things are actually better than the used to be. Table 17 used to be just as confusing as Table 16. Upon suggestions from us and SPIN, USCG adopted on our proposal with a few changes and Table 17 is now much less confusing.

At times the industry has been caught on tape laughing, joking, and celebrating the results of their “independent testing” of propeller guards.

Pulls Back Any Internal Development

Whenever any propeller guards or other propeller safety devices have been made by the industry itself, they later try to discredit their own work. At times the industry has been lured into making or using propeller guards for the potential sales of drives or boats to large special projects or applications (the military, theme parks, surf saving, etc). Then when they recognize they would be asked in court, how can you say guards are no good while you are using them over here, the industry stops the project and say the guards failed. Others say the industry discredited their own products when they recognized the guards would cut into their very lucrative business of selling replacement propellers.

Education is the Only Answer

Conventional propeller guards (cages, rings, concentric rings) are fairly simple to manufacture. However, to do so profitably has some challenges.

If we look at real products available off the shelf the recreational boating industry has created in the propeller safety segment there are a few things they can point to.

These are the only two products that quickly come to mind beyond continuing to try to fix their shifters that sometimes jump into gear or allow drives start in gear. If anybody is aware of other products from the industry, please send them to us and we will post them here.

So Did the Boating Industry Willfully Suppress the Development and Deployment of Technologies Related to Propeller Guards and Other Propeller Safety Devices?

We find it hard to believe that even the industry would deny that they suppressed the development of propeller guards and related propeller safety inventions. They even suppressed their own guards. Was this by design? Did they willfully, intentionally set out to suppress the development of propeller guards? The industry will obviously deny it, but the evidence seems a bit overwhelming. What do you think? Please share your G-rated thoughts with us.

If anybody is aware of any other ways the boating industry has suppressed the development of boat propeller guards or other propeller safety devices please send them to us using the contact us tab at the top of this page. Or if you want to make you comments public, use the comment box below.

We will continue to update this page as they become available.

We will pre-list some items here we are waiting for some more details on before we add them to the list.